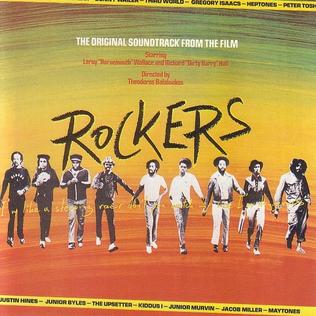 Rockers is a 1978 Jamaican film by Theodoros Bafaloukos. Music is integral to this seminal Jamaican film, as it follows the exploits of drummer Leroy “Horsemouth” Wallace, who plays himself, and featuring a myriad of other denizens of the music industry in lead roles and bit parts. The movie itself was awash in music, which pours out of clubs, studios, record shops, and radios. The soundtrack features only some of the songs included in the film, but what a collection of cuts it is. Bunny Wailer’s anthemic title track, Inner Circle’s infectious “We a Rockers,” Jacob Miller’s masterpiece “Tenement Yard,” Peter Tosh’s threatening “Stepping Razor,” Junior Byles’ equally forceful “Fade Away” — classic songs one and all.

Gorgeous harmonies are delivered up by the Maytones, Justin Hines and the Dominoes, and the Heptones on some of their greatest songs. Jamaica’s smoothest singer,Gregory Isaacs, performs a sublime “Slavemaster,” Junior Murvin’s sweet tones simmer across “Police and Thieves,” and Kiddus I delivers up an extraordinary cultural toast. One of the most arresting scenes in the film belonged to Burning Spear’s Winston Rodney, performing a powerful a cappella “Jah No Dead.” It is just as potent on record and segues exquisitely into Third World’s loving cover of “Satta Amasagana.” From rockers to grounations, Rockers had it all, and the soundtrack remains one of the most diverse yet coherent albums of the roots age.