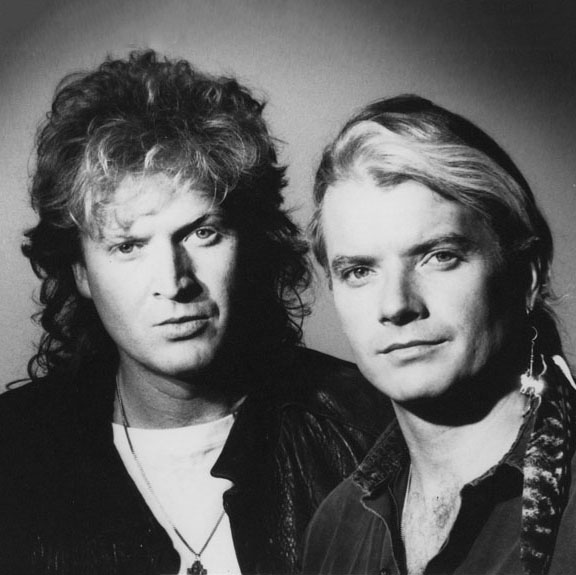 Chris and G.P. Partland arrived in Toronto in 1979 from their hometown of Colgan, Ontario, and formed Oliver Heaviside (named ostensibly after the British electrical engineer, mathematician, and physicist), a Toronto bar staple of the early 80’s. In 1982 their song ‚’Level Crossing’ appeared on radio station Q107’s Homegrown Volume 4 compilation, and the band soon attracted the attention of Capitol Records A&R rep – current EMI President Deane Cameron. “Electric Honey” was their first album as the Partland Brothers. This Capitol release in 1986 gave way to their first hit single “Soul City,” a soaring anthem featuring the brothers’ distinctive close-harmony vocals. ‚’Soul City’ charted in the Top 10 in Canada, and Top 30 on Billboards Hot 100 Chart in the U.S., along with follow-up single, the Jim Vallance-produced ‚’One Chance’, which still plays across North American airwaves to this day. The success of the Partland Brothers debut album earned them tours with the Moody Blues, and the Beach Boys in the US, as well as their own headlining gigs at home in Canada. During this time they also appeared on a number of popular television programs, including American Bandstand and The Late Show with host Arsenio Hall, furthering their profile across North America.

Management struggles ensued, and it was 1990 before the brothers were able to record and release their second album, “Between Worlds,” produced by Jon Goldsmith (Bruce Cockburn). The slickness of ‚’Electric Honey’, had been replaced with a more acoustic rock and roll sound, as ‚’Between Worlds’, moved the Partlands closer to their roots. The brothers played occasionally during this period, highlighting their unique talents – as well as those of their always-incredible band of respected musicians. It was another three years and a label change to Kinetic Record before their next studio album, “Part Land, Part Water,” was released. Production duties were given over to Ken Greer (Red Rider guitarist and Tragically Hip producer), who also played lead guitar, pedal steel, mandolin, bass, and all keyboards on this album; and had previously played on ‚’Between Worlds’. With this offering, the Partland Brothers‚ evolution marked another positive musical shift. The brothers spiritual roots came shining through in the songs ‚’Lift Me Up’, and ’Heaven In Your Heart’, while ’Lean Into It’ tells a story of commitment, and believing in the idea that the first to succeed are the last ones to quit.

More recently, the Partland Brothers song ‚’Fly Like a Hawk’ (aka Ronnie Boy) was featured in the 2004 rockumentary ‚’Ronnie Hawkins Still Alive and Kicking’ telling the story of their good friend and rockabilly legend Rompin‚ Ronnie Hawkins. Recent live engagements have included a number of special performances in support of the Military Families Fund, an appearance in Las Vegas in 2009, and invitations to play well attended 2010 Calgary Stampede events. With the official release of ‚’This Is Who I Am’, as well as a new compilation CD released by EMI in August 2010, brothers Chris & G.P. Partland have put together a new touring family and are back on the road having fun playing for fans, old and new, and spreading the spirit of both their past and present through their timeless music.