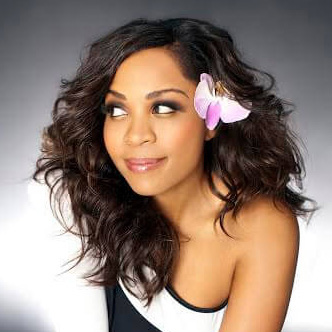 Divine Brown, previously known as Divine Earth Essence, is a Canadian rhythm and blues and soul singer and theatre performer.

She is currently known for her 2005 Canadian radio hit “Old Skool Love”. Even without an album prior to 2005, she was invited to perform at various musical festivals around the world. Her debut album Divine Brown was an underground hit and was successful in the mainstream market. She has a five-octave vocal range. Her second album, The Love Chronicles, was released on August 19, 2008 and won a Juno award for best R&B/Soul album of the year in 2009. To date, three singles have been released from the album: “Lay It On the Line”, “Meet Me At the Roxy”, and “Sunglasses”. Brown grew up in Toronto, Ontario. She toured with the Backstreet Boys for their Unbreakable Tour in North America in 2008.

In January 2011, Brown recorded a tribute to Dennis Brown, “Sitting & Watching”. Brown’s third album Something Fresh is set to be released in Fall 2012 under Universal Canada. First single “Gone” is set to release early summer. “Gone” produced and co-written by the Rezza Brothers. Some of her most recent work includes singing background vocals on Drake‚ Grammy award winning album ‚ Take Care.