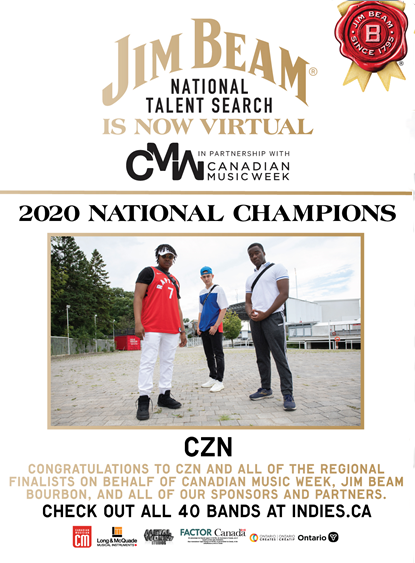 Congratulations to CZN on being the grand-prize winners of the 2020 Jim Beam National Talent Search!

Presented in partnership with Canadian Music Week, the Jim Beam National Talent Search Tour has provided 40 of Canada’s best new bands with their own virtual stage, ownership of their own recordings, and starring roles in this musical event that could rewrite the way homegrown independent talent is discovered.

The tour included eight episodes. Each episode focused on one city and featured interviews and performances from five local bands. All Toronto finalists as well as CZN from Ottawa recorded their performances here at Metalworks Studios with engineer Wayne Cochrane. The winner was chosen based on votes from across the country.

As part of their grand prize CZN, who represented Ottawa in the competition, will have the opportunity to have one single professionally recorded, mixed and mastered here at Metalworks Studios. Congratulations on your win - we are looking forward to welcoming you back to the studio!

Watch the video below to see Josie Dye from Indie88 present CZN with their well deserved award!

You can still watch all the finalist performances at indies.ca